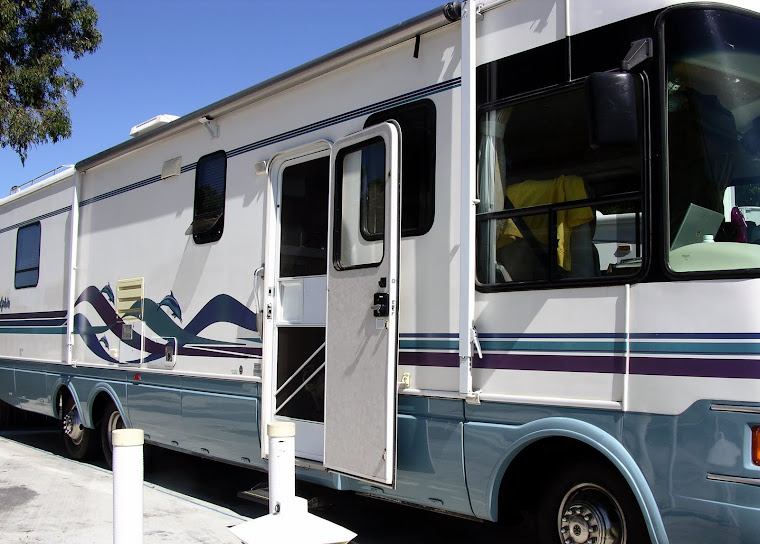 A Spendid Day & A Spledid Meal

We got up again this morning to find there had been a heavy fog and the temperature had dropped.  It's called hoar frost, and develops from the moisture in the ground rising and freezing.  The beauty is always stunning, never exactly the same twice.  Everything looks like it's been powdered sugared, with beautiful crystals forming.  This is the 3rd day in  a row that we've seen this specatcular sight - although it's a little lighter than before.

Monday, as the sun burned the fog off, we were stunned by the beauty of our world. Some giant power had frosted everything with lovey sugary crystals.  Power lines, tree brances, even the most mundane things were made more beautiful than we could believe. 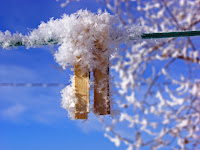 Clothes pins on the line became beautifully decorated with the frost.  It was amazing against the brilliant blue of the skyl 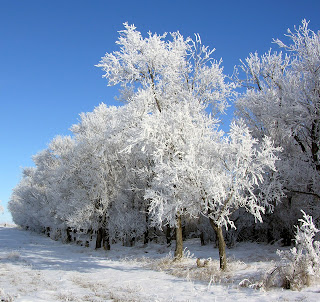 The windrows of trees looked like they were in full bloom with frosty white blossoms so delicate and fragile that the lightest breeze would blow clouds of them to the ground.

We watched out the windows that day, the sun playing with light and shadows on the rolling prairies made a constant show that was better than any TV.  As little puffy or wishp clouds blew over they would cast shadows on the snow cover hills.  The view changed hourly - it was hard to not just stand a gaze raptly out at the beautyful countryside. 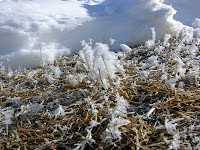 Even the little weeds on the ground, poking up where the snow had been plowed looked like little frost covered trees.

Of course life calls, and we had to move on to the "projects" (sounds better than"chores" doesn't it) that we had lined up for the day. Some of the Cooking.com members were planning a MLK memorial review dinner.  There were a few variations but the general theme was cold oil fried chicken, and banana pudding.  Appetizers ranged from deviled eggs to bread & butter pickles, sides varied widely. 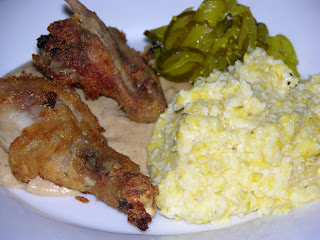 I think one of the reasons the chicken was so amazing was that it was totally organic from an Amish farm, tender, and tasty!

The grits were stone ground, slow cooked and wonderful.  But, the hit of the meal was Maya Angelou's Banana Pudding.   I have made lots of meringues - all of them either cookies or as pie shells for a Lemon Angel pie (from back in the 70's).  I've never made one that goes on top.  They weep, they do all kinds of strange things if you screw up one little thing.  But this is the new fearless me - so I made it!  OMG.
I will do this gain.  I may even try lemon meringue! 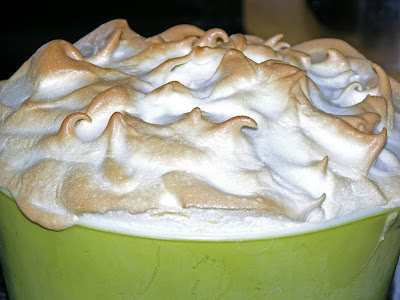 Preheat oven to 350°F.
Combine 1/3 cup sugar, cornstarch, and salt in a large saucepan; stir until blended. Stir in milk. Cook over medium heat, stirring constantly until thickened and boiling; boil 1 minute, then, remove from heat.

In small bowl whisk egg yolks, then whisk in about 1/2 cup of the hot custard until blended. Pour yolk mixture back into custard in saucepan; cook over medium heat, stirring, for 2 minutes. Stir in butter and vanilla until blended.

Place half the vanilla wafers on bottom of shallow 2-qt. casserole. Top with layers of banana slices and custard. Repeat layering, ending with pudding.

Immediately spoon meringue over hot custard, being sure the meringue touches baking dish on all sides (this helps prevent it from shrinking). Transfer to oven and bake until golden, 20 minutes. Remove from oven and cool 1 hour. Refrigerate at least 4 hours before serving.   (I set mine in a big pan, covered with foil, and stuffed it in a snowbank to chill.)
Posted by Cook Afloat at 9:41 AM

I've been all over this site and can't find all the posts. I know you must have lots of folks following your adventures...

About the above recipe: we don't all have a snowbank to keep it chilled!! LOL Nite, J

14 years ago we lived onboard our wonderful houseboat the "Infinite Child" (something to do with us not wanting to grow up). We loved being able to stay home and go someplace. Living on the houseboat was a blast, we could cast off the dock lines and head out. There were raft-ups with friends, and leisurly weekends in the marina with more friends. We've missed that (among other things) over the last few years and so decided to get a motorhome and "stay home and go someplace" again.

This should be an interesting trip! Stop by once in a while and find out about the great places we'll see, the food we'll find, and fun we'll have traveling and living in a 35' motorhome with 4 dogs and a cat.

If you see Infinite Child 2 in an RV park stop by and say hi! (Look for North Dakota Veterans plates IKID2)

I'm ready - get this show on ther road!